Luck of the Irish to you my Gentle Readers. May Saint Patrick’s Day bring you much revelry. It was this day in 461 AD that the man who would become the patron saint of Ireland died in Saul, Downpatrick, Ireland.

Image from The Famous People.com

The man began life as a son in a Christian family in England with Roman Citizenship. Patrick lived his well to do lifestyle until, at the age of 16, he was captured and taken to Ireland by marauders.There he spent 6 years as a herder, turning to his religious faith to survive his abduction. When he escaped and returned to England, it would be natural for the man to hold a grudge against his Irish captors. This is not the case.

Patrick tells us in his own words, in his book Confessio, that he experienced a dream that told him to return to Ireland. After becoming an ordained bishop, Patrick did just that. He returned to his kidnapper’s homeland to preach the Gospel. He spent 40 poverty stricken years: building churches, teaching, traveling, and converting thousands of Irish. Instead of rage or hatred for those who took 6 years of his life, Patrick sought to better the Irish people. For this he was named their Patron Saint.

The legends of Saint Patrick have grown in the succeeding centuries. There are tales of him baptizing hundreds of people in a day and drove all the snakes from Ireland. Some say he used the three leaf clover, Ireland’s famous shamrock, to teach about the Holy Trinity. I would ask what is the deal with the 4 leaf clovers then. Who is the extra leaf?

Anyway, I think there is a great lesson in Saint Patrick to think about this day as we all don our green attire and drink or eat to excess. That lesson is one of forgiveness. If a young man of 16 in the early 400s can find a way to not only forgive his aggressors, but seek to better them through education, then we should be able to do so much more today. Drink the green beer and wear the leprechaun hat today my Gentle Readers. Also channel the incredible forgiveness of Saint Patrick. Until next time. Live well, write well, be well. 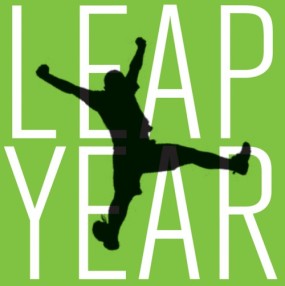 Thanks to Quotes Giant for this image.

Thank you Julius Caesar for the concept of Leap Year. You have royally screwed over so many poor children born on this day. Truly, isn’t it horrible to only get a birthday every 4 years? A baby born on February 29th 2016 will be unable to buy alcohol until until 2104, which is how long it would take for us to have 21 leap years. This is because the year 2100, while divisible by 4 and 100, is not divisible by 400. This means the Gregorian Calendar says, No, there is no leap day this year. (Yes my Gentle Readers, I am aware it doesn’t work that way for people born on February 29th.) In the US, Great Britian, and Hong Kong, a leapling, or leap year baby, would turn 18 on March 1st of their 18th year.

Tony Robbins, motivational speaker, was born on this day in 1960. so that makes him a whopping 14 years old. HAHA. I couldn’t imagine taking advice from my 14 year old self.

There is an Irish legend, that We are to blame St. Brigid for leap days, as she struck a bargain with St. Patrick to allow women to propose to men one day out of every 4 years. This Ladies’ Privilege day may not be a real privilege to some. Thank goodness we abolished the silly notion that only men can do the proposing right?

Good thing for Leap years though, without them, today would have been July 15th, 2017, over a year and 4 months into the future. In my neck of the woods we are talking winter in July. Not my kind of party thank you very much.

Well, hope everyone enjoyed some humor today as we “leap” further into 2016.  And for those married or contemplating marriage on February 29th, the Greek would advise against it.