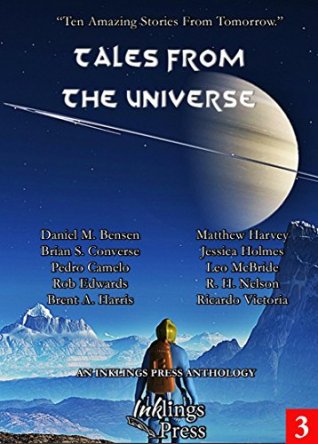 This latest review is of a different variety for me, My Gentle Readers. It is a collection of short stories from different authors. I want to specifically thank Leo McBride for bringing this book to my attention. We will get to his contribution to the book in due course.

What I’m going to attempt to do is write a few sentences about each story and provide you with a link to find more about each author. So hold onto your hats friends, it’s going to be an exciting ride.

Daniel flips the age old Religion versus Science debate around in this short work. His archaeologists are digging up unicorns and dragons looking for evidence of why Noah dropped marsupials off in Australia when they have a philosophical debate with their dedicated atheist colleague. Definitely could be expanded upon.

You can find Daniel on his blog by Clicking Here.

Upgrade to Murder by Rob Edwards

Rob explores the controversial field of AI in this brief work. He raises an interesting question about what could happen if computers were to gain a measure of sentience.

You can find Rob Edwards by Clicking Here.

Nelson tackles a futuristic society where important people, those needed for society, don’t die. Their consciousness is downloaded into a new body, unless you are “forgotten”. What if someone didn’t want to let go of a “forgotten”? Nelson explores that in this piece that could use a massive expansion.

Sadly R. H. Nelson has an “irrational” hatred of social media so if you want to reach him, maybe seek out his publisher.

Dead in Space by Matthew Harvey

A salvage team and an old military ship adrift in space, but something is still alive.

The Familiar Road by Pedro Camelo

A story of a man of habits, his loving wife, and the old man next door who just wants to have a beer with his neighbor. Not all is as it seems.

You can find Pedro Camelo on Facebook  by Clicking Here.

Three different races grouped together for space exploration. A neutron star about to explode and a mysterious structure on the surface that defies logic.

What do you do when you are a galactic criminal exiled to earth? You become sheriff of a small town, that’s what.

The Ellian Convergence by Brent A. Harris

Brent weaves a tale of machines rising against what comes next after they have already gained sentience. Even in this short piece he weaves a world of possibility with cohesion.

How fast could the military respond if they could just download your personality into a cloned body near the mission site? Logistics is now a matter of a ship on auto pilot with the proper supplies in a cargo hold. Leo explores this in his story that has potential for so much more.

Deep In The Rock by Jessica Holmes

From her bio Jessica is a new author but I can’t wait rinsed where she goes after this Space Mining short story.

Tales From The Universe was a joy to read and I hope all of these authors have longer works coming that I can track down in the future.

You can find it on Amazon by Clicking Here