Today on Meet The Author Monday, we have Kevin McAllion, a Scotsman whose first novel, Moristoun, was released in March of 2016. As usual, we will put my comments/questions in BLUE and Kevin will be in GREEN.

Thanks for stopping by today, Kevin. I always like to get started hearing what brought an author into the literary world as a reader first, as that is how many of us got our start.
I was obsessed by football as a kid and only read magazines such as 90 minutes and Four-Four-Two but I started off in fiction with a selection of Woody Allen short stories and was hooked. The first writer I really loved was Roddy Doyle and I rattled through his Barrytown trilogy in a matter of weeks. The most famous of these books is The Commitments but my favourite was The Snapper as the main character was Jimmy Senior and he always had the funniest lines. Since then, I’ve been reading more stuff from foreign writers, thanks to my brother who introduced me to the likes of Gunter Grass, Gabriel Garcia Marquez and Milan Kundera. The great thing about these authors is that you learn about other countries and cultures as well as immersing yourself in a great story.

That’s one of the greatest things about the digital age is being able to “travel” to these other lands so much easier. What genre sparks your interest the most?
I really enjoy books that marry a fascinating story with politics, especially those that shine a light on oppressive regimes. My favourite is The Case of Comrade Tulayev by Victor Serge which captures the horror and paranoia of the Soviet Union during Stalin’s great purge. The Feast of the Goat by Mario Vargas Llosa also gives great insight into a despot from South America, as does the brilliant Brief Wondrous Life of Oscar Wao by Junot Diaz. Great books should always make you question the world we live in and these ones, while painful to read in parts, do just that.

I think you have certainly given us all some books to think about adding to our To-Read piles. From prolific reader to writer, what spawned this jump for you?
The turning point for me was buying a book from a charity shop that was a compilation of work from contemporary Scottish writers. As I read through each story, I thought: ‘If they can do it, why not me?’ It made me realise that you could write about Scottish issues and people and still make it entertaining. There was also a part of me that secretly thought: ‘I could do better than that’ as I read some of the stories and that gave me the extra push I needed.

A little healthy competitive streak never hurts for motivation. Do you consider yourself a writer of a specific genre? Or do you dabble in several?
I try to write in a comedic style, mainly just to amuse myself first and foremost. I’ve only written one book so far and if I don’t follow it up with another I’ll be forever pigeon-holed as a writer of black comedies.

They say laughter is the best medicine, even if it is dark humor. Share with my readers a little about your journey as a writer and publishing your first novel.
I’ve worked as a sports journalist since I was 19, when I started writing football match reports while studying at university. Since then, I’ve worked for a number of newspapers in Scotland. I currently work as a production journalist, editing, designing and reading pages. After dabbling with several attempted novels and bits of poetry, I came up with the idea for Moristoun in 2012. It took me nine months to finish the first draft, motivated by the desire to get it finished before my daughter was born, then another year to edit the manuscript. I contacted a few agents to see if they would be interested in it but one of them actually turned out to be a publisher, Austin Macauley. They liked the first three chapters, asked me to send the full manuscript then offered me a deal after reading that. 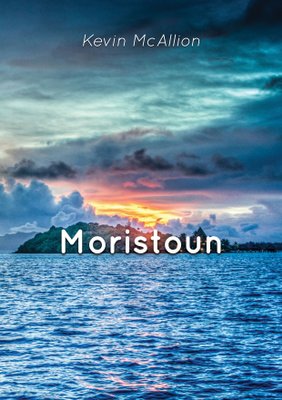 A dream come true then to find a publisher to pick you up. From the picture it’s clear you have a little one in the house. They can be a handful. When you aren’t working on that second comedic book, what passions do you enjoy?
I work full time as a journalist and have a daughter who is four years old so free time is very much of the premium. Despite losing most of my pace, I still run about every week masquerading as a footballer and occasional embarrass myself on a tennis court. Music and reading are my other passions, something I can thankfully enjoy in tandem.

Sounds like you have a busy schedule to keep, Kevin. I understand that you have another project that you work on that is a bit entertaining. Tell me about it.
I run the world’s only spoof online monkey park, rhesuspark.com. What started off as a made-up newsletter and pamphlet for a desktop publishing exercise in 1999 has now spawned into a monster of a website that continues to grow arms and legs. My made-up nonsense often convinces gullible people on Twitter that there is actually a dysfunctional monkey park operating in the heart of leafy Shropshire. If you fancy making the acquaintance of Rhesus Park CEO David Alsatian you can follow him on Twitter @rhesuspark

A fake Monkey Park. Sounds worth a look. I want to thank you again for stopping by and chatting with me. Good luck with your projects and don’t let those monkeys drive you bananas.

If anyone would like to check out Kevin’s projects and keep up to date with his monkey business, you can find him at the below links.

And if any authors out there reading this want to be featured on Meet The Author Monday, You can CLICK HERE for more information.

A lighthearted look at life on any given day