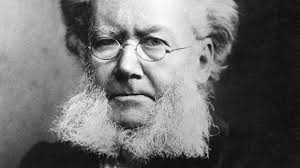 1891 theatre critics clamor to ridicule Henrik Ibsen’s Ghosts, which opened that day in London. The play, written a decade before, focused on the subject of syphilis. It was reviled publicly, but Ibsen did not give up. He began to gain traction in the more progressive theatres of the time. His controversial plays were universally condemned in conservative circles. Ghosts would go on to become his most frequently performed work to this day.

Norwegian born Henrik Ibsen was the oldest of five children. Ibsen’s love of theatre came early in his life and he was known for his puppet shows performed for friends and family. His father, a merchant by trade, went bankrupt when Ibsen was 15, forcing the young man into the work force while he saved for university. School was not going to factor much in the young playwright’s future and he quickly set out on nearly a lifetime of travel around Europe, writing and directing in the theatre.

His 1879 play, A Doll’s House, portrayed a dark view of a woman’s disillusionment with her marriage. Critics were not happy with its bleak ending. Ghosts was written in 1881, and also angered the more conservative critics of the time. Ibsen’s momentum rolled on with An Enemy of the People (1882) and The Wild Duck (1884). This time of his life established him as a masterful playwright of the time. In 1891, he would return to his native Norway. He would remain there until his death in 1906, from a series of strokes.

I hope all of you out there will take the story of Henrik Ibsen to heart. My Gentle Readers, he was a man ahead of his time. Although he saw a measure of success in his lifetime with his work, it is his passion for pushing the envelope that I hope we can all aspire to. Not for the sake of shock value, but for the purpose of opening people’s eyes to the plights of humanity. Until next time. Live well, write well, be well.