Though his birthday is 2 days away my Gentle Readers, today belongs to Tennessee Williams. His highly successful and Pulitzer Prize winning play, Cat on a Hot Tin Roof, opened on this day in 1955 in New York City. 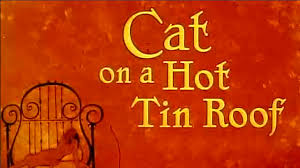 Tennessee Williams was a child of an abusive traveling salesman and an overly controlling mother. It is believed he used his family, especially his mother and beloved sister Rose, as the basis for characters in multiple works.

Williams, though alcoholism and drug use eventually took his life, was a picture of overcoming obstacles in order to succeed. Though he was pulled from school to work for his demanding and demeaning father, Williams would return to school, eventually earning his Bachelor of Arts degree in English from University of Iowa in 1938. He took great care of his mentally ill sister Rose, especially after her disastrous lobotomy administered as a cure for her schizophrenia.

In Williams we learn that you can overcome any obstacle, but beware the demons you allow entry into your heart. Williams went from being a favored punching bag of his father, to a very successful playwright. It is unfortunate that his later years would be claimed by alcohol and drugs.

Seek to overcome the doubts, naysayers, and those holding you back from your dreams my Gentle Readers. Just take care that you do not fall victim to what you were trying to overcome. Until next time. Live well, write well, be well.

Let me hear your thoughts my Gentle Readers... Cancel reply

The 2023 Writing Workshop of Chicago